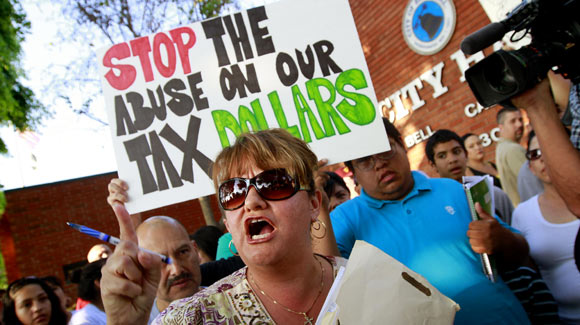 Since the pub­lic cor­rup­tion scan­dal broke last sum­mer in the city of Bell, hun­dreds of read­ers have voiced con­cerns to The Times about po­ten­tial prob­lems at the gov­ern­ment agen­cies in their communities.

Some have dug into government records and shared their findings with Times reporters. Others have expressed confusion and frustration about the sometimes bureaucratic process of obtaining information from City Hall.

With this in mind, The Times has launched a new California Public Records guide and clearinghouse. Times reporters Sam Allen and Abby Sewell have prepared a simple, detailed guide designed to help the public understand its rights and navigate the process of obtaining government records.

The Times also en­cour­ages read­ers to share gov­ern­ment re­cords you con­sider news­worthy or in­ter­est­ing. Send us doc­u­ments, and a Times staffer will re­view them and post them to this site.

Some readers have already submitted records.

One document, a public records request to the city of Bell, shows the lengths that ex-City Administrator Robert Rizzo went to to conceal high salaries. Bell resident Roger Ramirez said he requested the salaries of top city officials in 2008 after hearing rumors of high pay. When he received the city’s response, however, the document significantly underreported the true amounts. He filed the request nearly two years before the Times’ first reported that City Council members were earning nearly $100,000 and Rizzo’s salary was $787,000.

That document later became part of the district attorney’s investigation into Rizzo, who has been charged with falsifying public records.

Other documents submitted by Glendale resident Barry Allen show that the city of Glendale frequently awarded merit pay to employees. Allen said the fact that the city awards the bonuses is not well-known and he wanted to know how much was being spent. But when the city responded to Allen, it redacted the justification for each of the bonuses, saying it would be an invasion of employees’ privacy.

The Times hopes this page will serve as a resource for those seeking information from their governments and become a place where people can share the information they've dug up.

California Public Records Guide: Share your records with The Times