Program to identify illegal immigrants in jails should be expanded, L.A. sheriff says 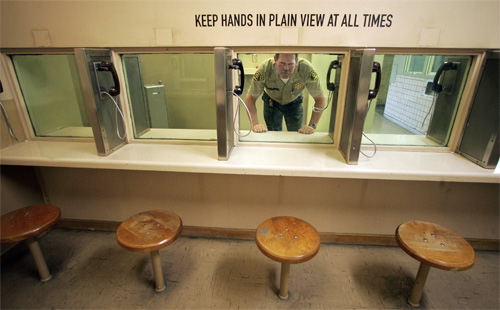 The L.A. Sheriff's Department wants to extend a joint project with federal immigration officials to  identify illegal immigrants in the L.A. jail system.

The Board of Supervisors on Tuesday will consider a request by L.A. Sheriff Lee Baca for his department to continue working with U.S. Immigration and Customs Enforcement on the effort to track illegal-immigrant criminals.

L.A. County was a pioneer in working with the federal officials on screening inmates, and more than 11,000 have been referred to ICE for possible deportation, according to a Times report.

The program has won praise from some politicians and has been embraced by other counties, but some civil-liberties groups have objected.

In 2008, L.A. jailers estimated that about 4,000 inmates -- or one-fifth of the daily jail population -- were foreign-born, according to the Sheriff's Department. About 3,100 inmates probably are eligible for deportation, the department said, either because they are illegal immigrants or because their criminal records have invalidated their green cards.

According to a memo signed by Baca, the new agreement would continue the partnership with a few changes.

"In July 2009, ICE asked all of its participating agencies to sign revised memorandums of agreement that improved oversight, management, and communication within the program," Baca wrote. "The duties of Department personnel will continue to be the same duties performed under the previously approved agreement; however, there will be enhanced supervision by ICE personnel along with additional training."