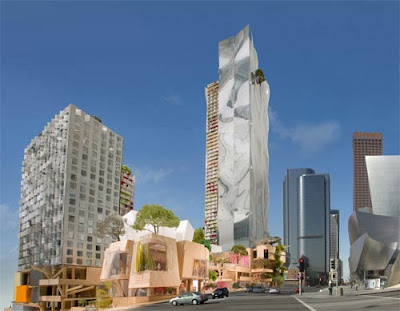 The stalled Grand Avenue project in downtown Los Angeles is now in the running to be the home of philanthropist Eli Broad's new art museum.

Los Angeles County and city officials authorized negotiations that could bring Broad’s proposed museum to the site on Bunker Hill. Both Santa Monica and Beverly Hills are already being considered as locations for the museum.

“We have a team of negotiators and they were instructed to proceed with discussions with the Broad Foundation to consider his proposal and reach a mutual agreement,” said L.A. City Councilwoman Jan Perry, who is on the board of the Grand Avenue Authority. The authority is a joint city-county agency that is overseeing the private-public development.

The project stalled last year after its developer was unable to secure a construction loan for the multibillion-dollar project amidst the credit crunch.

Getting Broad's 2,000-piece contemporary art collection would be a coup for Grand Avenue.

Broad Foundation spokeswoman Karen Denne said “we are considering multiple locations and look forward to making a decision this spring.”

Broad, who has long been a proponent of the mega-project on Grand Avenue and creating a Champs-Elysees for downtown L.A., was until recently a member of the committee overseeing the project on behalf of the joint powers authority. Officials said today that Broad had resigned from the committee in November in order to avoid any potential conflicts of interest as the negotiations move forward.

-- Ari B. Bloomekatz and Cara DiMassa