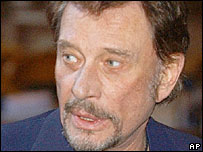 Those waiting impatiently for the traffic light to change Monday may not have noticed, but the eyes of France were focused on the corner of Beverly and San Vicente boulevards.

That’s where a rock legend known as the “French Elvis” is lying in Cedars-Sinai hospital, slowly coming out of an induced coma in a medical drama that has engrossed the European continent for the past week.

A swarm of reporters and photographers has been camped out on the corner in tents and satellite trucks for days, causing curious passersby to wonder which celebrity they were tracking.  The onlookers were puzzled when they heard it was pop singer Johnny Hallyday.

Throwing in his French nickname didn’t help either. “You guys are here for an Elvis Presley imitator?” one of them asked a French journalist.

Actually, Hallyday is like Elvis and Michael Jackson rolled into one -- at least according to the breathless Paris-based media horde that have converged on the hospital.

“He’s supposed to have introduced rock ‘n’ roll to France. He’s our Elvis,” said Benoit Petit, a reporter with BFM-TV, a French television news channel similar to CNN. “If he were to die, we’d be talking about him all day long.”

Keeping vigil has been an exhausting and frustrating experience for the reporters. During breaks, they bypass the Westside’s various French bistros in favor of burgers and Jerry’s Famous Deli.

By mid-afternoon, Hallyday had reportedly awakened from his coma. But the journalists and broadcasters waiting on the corner weren’t entirely certain about that, since the information was coming from Paris, not from across the street.

Officials at Cedars-Sinai have refused to confirm that Hallyday is even a patient, let alone what his condition is. It was unclear whether he was admitted there under that name or the name he was born with: Jean-Philippe Smet.

"In France, sometimes you can find a doctor or nurse who will talk. Here, they keep the secret,” Clarens said, adding that occasional word of Hallyday’s condition has been relayed to France by his family members, who are here with the pop star, and by celebrities who have flocked to the hospital to pay their respects.

From Paris, news organizations forward the latest update to reporters on the corner of Beverly and San Vicente, who relay it back to their French audiences. Still, his Los Angeles hospitalization has gone almost unnoticed in this country.

“All the French media is here, but no American media has been here but you,” Clarens said.