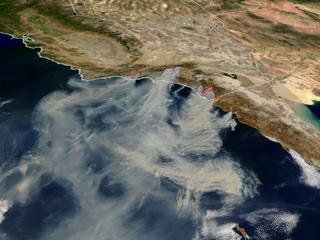 A San Bernardino County grand jury has indicted a man on five counts of murder in connection with a 2003 wildfire that destroyed 1,000 homes and resulted in the deaths of six people who lived in the path of the blaze and died from heart attacks, authorities said.

Fowler has been in prison in Lancaster since 2003 on burglary charges, authorities said.

A second suspect in the fire, Martin Valdez, 24, was killed in an unrelated shooting in 2006 in Muscoy, Calif., authorities said.

Witnesses told authorities that they saw a man flipping what they believed were lighted matches from the window of a van, setting off the Old fire. They helped authorities draw a composite sketch. The sketch received widespread publicity, and investigators spent the next three months checking out thousands of tips.

Investigators eventually tied Fowler and Valdez to the fire during the six-year investigation, authorities said.

Photo: View from space of Old Fire and other blazes in Oct., 2003. Source: NASA