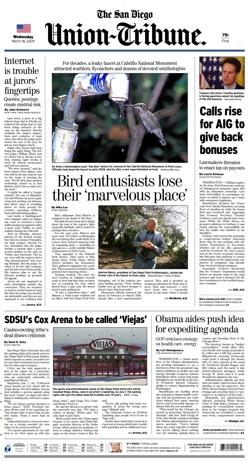 The union representing Los Angeles police officers is pressuring the owner of San Diego’s main newspaper to change the paper’s editorial stance on labor issues or to fire its editorial writers.

The  feud is rooted in the recent purchase of the San Diego Union-Tribune by Platinum Equity, a private Beverly Hills firm.

Platinum relies on a $30-million investment from the pension fund of Los Angeles police officers and fire fighters, along with large sums from other public-employee pension systems around the state, to help fund its acquisitions of companies. As League President Paul M. Weber views it, that makes the League part owner in the flagging Tribune and League officials are none to happy with the paper’s consistent position that San Diego lawmakers should cut back on salaries and benefits for public employees in order to help close gaping budget deficits.

"Since the very public employees they continually criticize are now their owners, we strongly believe that those who currently run the editorial pages should be replaced," Weber wrote in a March 26 letter to Platinum CEO Tom Gores.

Weber, in an interview, emphasized that the League is not demanding changes in the paper’s news coverage of the issue or in its staff of reporters. "It’s just these people on the opinion side. There is not even an attempt to be even-handed. They’re one step away from saying, ‘these public employees are parasites,’ " Weber said.

Bob Kittle, editor of the Union-Tribune’s editorial page, rebuffed Weber’s comments. While his staff has written several editorials critical of the benefit and pension commitments city leaders have made to San Diego’s five public employee unions, he denied Weber’s charge that the paper is out to hurt public employees.

"We are not anti-public safety or public employee," he said. "All of this has to be considered within the context of what the city can afford. A bankrupt city can’t provide any public safety very well."

Kittle said no one at Platinum or higher-ups at the paper had contacted him about the union’s request.

Mark Barnhill, a principal at Platinum, acknowledged the letter from Weber but declined to comment on whether the firm planned to take any action. In a recent interview with the Union-Tribune, however, another Platinum executive indicated that the League is wasting its time.

"Platinum has no editorial agenda," he said. "We will rely on the newspaper’s professional staff to ensure that its pages appropriately reflect the values of the community it serves."