*Update: Petition on LAPD illegal-immigrant policy may be falling short 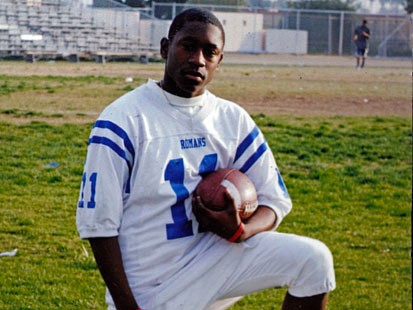 The family of slain high school football player Jamiel Shaw and Los Angeles mayoral candidate Walter Moore wanted to place a measure on the May ballot that would allow police to arrest illegal-immigrant gang members even if the officers had not witnessed them committing crimes.

But according to Moore's website, the petition effort is falling short, and today is the deadline. Petitioners have collected 68,000 signatures but need nearly 74,000 to qualify for the ballot.

Jamiel Shaw Sr. and his wife, Anita, an Army sergeant who has served in Iraq, have called for changes to Police Department policy on gang members suspected of being illegal immigrants. They want officers to routinely check the immigration status of known gang members who are crime suspects -- which Shaw said would make it easier to immediately deport them.

Special Order 40 is a 1979 measure that limits when officers can inquire about the immigration status of crime victims and suspects. It became the subject of intense debate earlier this year after the slaying of high school  Jamiel Shaw II. He was allegedly gunned down by a reputed gang member who was in the country illegally. Pedro Espinoza, who awaits trial on a murder charge, had been released from Los Angeles County Jail the day before the killing.

LAPD officials and others in law enforcement have strongly opposed the change. They argue that Special Order 40 works and is crucial in encouraging illegal immigrants to cooperate with police. Some civil rights groups also oppose changes to Special Order 40.

UPDATE: Walter Moore, the author of Jamiel’s Law, said Friday morning that activists had collected about 68,000 of the 74,000-plus signatures they needed. He says it will be difficult to get all those that are needed. But the Shaw family says they now have close to 70,000 and expect to get a flood of petitions turned in today that will put them over the top. The city clerk then must verify the signatures to make sure they are from registered voters in the city. And that will take at least a few days.

This is a proposed ordinance to deny "sanctuary city" protection to illegal aliens in gangs in the city of Los Angeles.

Whereas, the city of Los Angeles is now a "sanctuary city" for illegal aliens due to city policies that prohibit and inhibit the Los Angeles Police Department from investigating violations of federal immigration law (e.g., LAPD Manual Vol. 1, § 390 and Vol. 4, §§ 264.50, 647.35);

Whereas, the city of Los Angeles is unsafe for law-abiding citizens, legal aliens and illegal aliens due to the prevalence of gangs that routinely commit crimes including but not limited to murder, extortion, robbery, rape, theft, drug-trafficking, and vandalism;

Whereas, many, if not most, of the members of the gangs in Los Angeles are illegal aliens; and

Whereas, there is no legitimate public policy reason for the city to extend "sanctuary city" protection to illegal aliens in the gangs that are ravaging our city;

The people of the city of Los Angeles

Do ordain adoption of an ordinance as follows:

Section 1.  Jamiel's Law.  This short title of this ordinance shall be "Jamiel's Law," in honor of Jamiel Andre Shaw, II, a young man who had an exceptionally promising future until he was murdered in Los Angeles in 2008.

Section 2.  No Sanctuary For Gang Members.  The policy of this City from this point forward is, and shall be, to deny any "sanctuary city" protection to illegal aliens in gangs.  Neither the Mayor, the Chief of the Police nor any other City employee shall prohibit or inhibit Los Angeles Police Department officers from lawfully investigating possible violations of federal immigration laws by gang members.

Section 3.  Mandate To Investigate, Arrest And Assist.  The Mayor and the Chief of Police shall immediately develop and implement a plan for the Los Angeles Police Department, in cooperation with Immigration and Customs Enforcement and the United States Attorney, to identify, arrest, deport and/or prosecute and imprison gang members who are in the country illegally, without waiting to catch them committing murders or other crimes before enforcing the immigration laws against them.

Section 4.  Reporting Requirement.  The Mayor shall provide the City Council and the public with quarterly written reports describing in reasonable detail the City's efforts to implement Jamiel's Law.  The reports will include, at a minimum, the number of persons arrested by the Los Angeles Police Department for violating federal immigration laws, and the number of those persons who are gang members.

Section 5.  Definitions.  For purposes of this ordinance, the terms "gang" and "criminal street gang" shall include any group that fits either or both of the following definitions:  a) the definition of "criminal street gang" set forth in the California Street Terrorism Enforcement and Prevention Act, i.e., California Penal Code §§ 182.20-186.33; and b) the definition of "gang" set forth in the L.A.P.D. Manual, Volume 4, § 269.10.  The term "gang member" shall have the same meaning as in the L.A.P.D. Manual, Volume 4, § 269.10, namely, "A juvenile or adult who has been positively identified and documented as a gang member under the California Department of Justice's (DOJ) approved criteria."

Section 6.  Severability.  If any part or provision of this ordinance, or the application thereof to any person or circumstance, is held invalid, the remainder of the ordinance, including the application of that part or provision to other persons or circumstances, shall not be affected thereby and shall continue in full force and effect. To this end, the provisions of this ordinance are severable.