When Rania Alomar was hired to design a new animal shelter for the city of Los Angeles, the architect was given specific instructions: Create a temporary home for animals that increases their comfort, and by virtue of the shelter's design, makes people want to adopt a pet.

But can architecture really reduce euthanasia when the city's shelters are filled to capacity? Yes, Alomar said, if it’s a facility that people want to visit, a place where “you want to come in and feel like you are in a happy space.” 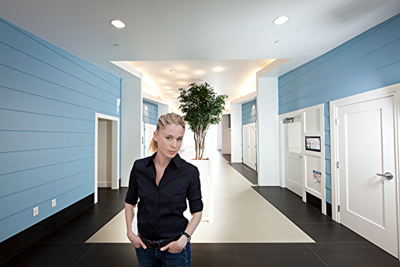 The $9 million South Los Angeles Animal Care Center is scheduled to open next month with 270 kennels, and the hope is that the facility will challenge the outdated perception of the animal shelter as dismal dog pound.

It’s a design experiment from an architect who has learned from experience -- designing an animal wellness center, an animal emergency room in Long Beach and a German Shepherd rescue facility in Santa Monica, where she is pictured here.

The exterior of the new South L.A. animal shelter is striking, with a front facade composed of a series of green stucco “ribbons” and concrete panels with overlapping foliage, shown at top. The modern design is a welcoming presence in a light industrial zone near Western Avenue and 60th Street.

But perhaps the most remarkable feature of the facility is its layout: Imagining the psychology of people who will come to the shelter to “shop” for pets, Alomar has designed the building with a retail model in mind. The architect thought of shoppers at a mall who allow themselves to be sidetracked by small boutiques on their way to a large department store, so at the shelter she created a series of displays with the hope of enticing them to consider “alternative” pets such as reptiles or bunnies or older dogs rather than, say, puppies, which are often the first to be adopted.

Visitors to the new shelter will walk through an open air gallery where every window features something different: a community room for education and outreach, a spay and neuter clinic, a reptile room, even an outdoor aviary. The puppies are housed at the back. Through her design, Alomar is, essentially, marketing the animals.

“We wanted animal shelters that invited people in and made them comfortable enough to create a relationship with a pet,” said Linda Gordon, a former liaison to the Bureau of Engineering for L.A. Animal Services, who recently retired. “Rania captured the idea that we can have a different kind of setting to look at our pets, or potential pets, by having open air kennels. This will cut down on disease transmission, smell and noise.” (That's an 7-week-old mastiff-pitbull puppy pictured here, getting some attention from volunteer Yesenia Conde at the current South L.A. Animal Shelter.)

During a tour of the facility last week, some of Alomar’s design choices were immediately apparent, such as raised puppy kennels that allow prospective adopters to see animals better, retractable roofs on the outdoor kennels and a series of plant screens that ensure that all dogs face something green instead of other dogs (thus reducing the agitated barking). “So many shelters have outdoor awnings for people,'' Alomar said. “Why not the animals?” Not visible in the concrete kennel runs: radiant floor heating and overhead misters to help with climate control.

With a background in sports and entertainment, Alomar said she found designing for animals a refreshing challenge from previous projects such as Staples Center. (As one of the project designers, she focused on the exterior skin of the building when working for the firm NBBJ.)

“You have to change your viewpoint and look at things from the dog’s point of view,” she said. “You have to enter their world.”

At the privately run Westside German Shepherd Rescue in Santa Monica, Alomar designed a facility to resemble a Cape Cod-style house. “I wanted it to feel like you are going to someone’s home to adopt a dog,” she said. Like the South Los Angeles shelter, the facility is laid out like a city, with a main boulevard plus kennels, or cottages, on either side. The hope is that visitors will feel like they are adopting animals who have been cared for, not abandoned. To promote a sense of calm, all of the walls and windows between the kennels were sound-proofed.

Animal shelters are often controversial, as are the officials who run them. The city of Los Angeles has struggled to appease critics of euthanasia, who lobby for “no kill” facilities, and legions of rescuers and volunteers, many of whom believe that more needs to be done to improve animal welfare.

Gordon said she is excited to observe architects and designers like Alomar working to build better shelters.

A white terrier at the current South L.A. animal shelter looks ready for adoption. The old shelter is the only one in Los Angeles that has not been redesigned; the new South L.A. shelter will be twice its size. Photo credit: Bob Chamberlin / Los Angeles Times

The rendering shows the front of the South Los Angeles Animal Care Center, designed by Alomar's firm RA-DA and set to open next month. Credit: RA-DA

The floor plan for the new South Los Angeles Animal Care Center shows the buildings in yellow and the outdoor kennels in green. The kennels are arranged to avoid dogs facing other dogs -- thus reducing agitated barking and an echo effect throughout the facility. Credit: Los Angeles Department of Public Works

The main "boardwalk" inside the rescue facility.

Kennels on both sides of the boardwalk are designed to look like beachside cottages. Photo credit: Ralf Strathmann

Foxtails and other evil weeds that can harm pets