All the Arts, All the Time

A bit of schizophrenia caught on a Broadway marquee 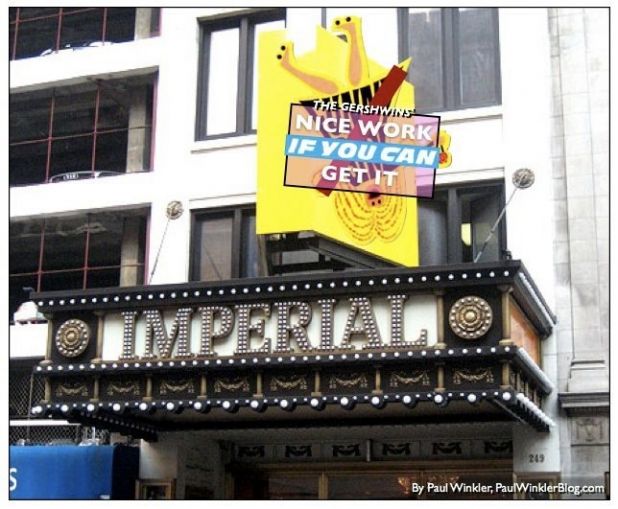 [Updated 6:10 p.m. Friday] When we spotted this image postedby blogger Paul Winkler we first thought he had captured an image of the Imperial Theatre's marquee with an old logo for "Funny Girl" covered up by a new sign for "Nice Work if You Can Get It."

But Winkler explains the image was of his own making and fanciful imagination, playing off last week's  abrupt  halt of "Funny Girl."

"The original photo of the Imperial Theatre marquee, which I did not take, actually had the 'August: Osage County' logo on it," Winkler writes in an email. "I added the 'Funny Girl' one FIRST and added the 'X' cause of the quick change. Then I put the 'Nice Work' title on top."

You might notice the "Nice Work' typography is borrowed from the signage for last season's short-lived "Catch Me If You Can."

Winkler's final touch was adding "The Gershwins'" to the 'Nice Work If You Can Get It" logo since that 2012 new musical will feature the music of George and Ira. Winkler some had fun playing off the new version of "Porgy and Bess," which is officially called "The Gershwins' Porgy and Bess."

Matthew Broderick, George and Ira Gershwin heading back to Broadway