On politics in the Golden State

California lawmaker to seek reelection after year in Afghanistan 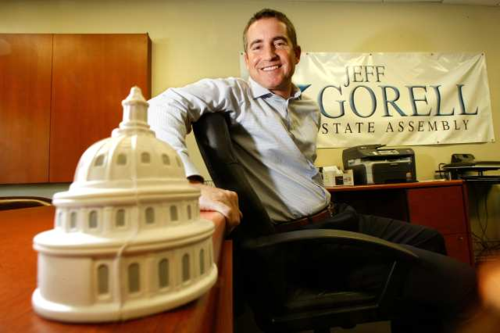 Assemblyman Jeff Gorell of Camarillo needn’t worry about those contesting his reelection challenging any of his votes during the last year. That is because he has spent the time out of the country, serving on active duty in Afghanistan.

Gorell, a Naval Reservist, took office in December 2010 and left three months later for a one-year tour of duty as an intelligence officer overseas. He does not return until March 18, so on Friday his wife, Laura, stood in for him and announced her husband’s plans to seek reelection this year.

“Jeff is very excited to be coming home in March to resume representing his constituents in the state Assembly,” Laura Gorell said in a statement.

Redistricting has put Jeff Gorell in the newly drawn 44th Assembly District, where Democrats have a slight edge in voter registration. He already faces some challengers, including Democrat Thomas Mullens Jr. Mullens, a business officer at UC Santa Barbara, served four years in the Navy. He was careful when asked about the effect of the incumbent’s absence during the last year.

"As a veteran, I appreciate Assemblyman Gorell's service to our country, but the district has not had a voice in Sacramento in his absence," Mullens said. "It's difficult to quantify what impact that has had, but it is better to have a voice than silence."

Educator Eileen MacEnery has also filed papers inducating she may run for the seat.

Photo: Jeff Gorell, pictured in 2010, is spending a year on military duty as a Naval Reservist in Afghanistan. On Friday, his wife announced he will seek reelection. Credit: Mel Melcon / Los Angeles Times